The superb BILSTEIN B14 kit for the VW T5 platform already has many fans and advocates, but as of last week, it also has a Nürburgring Lap record under its belt, thanks to being the suspension upgrade of choice for VW Group tuners Revo and their successful attempt at smashing Top Gear’s van lap record, originally set by Sabine Schmitz in a Ford Transit van.

The Top Gear record became the stuff of legend after Schmitz skilfully piloted a standard Ford Transit van to a ‘Bridge to Gantry’ time of 10.08. At the time, even the talented lady herself felt that this was as much as a standard vehicle could manage. This lead Revo to the question, ‘What could a lightly modified van, breathed on by Revo’s talented technicians, make the same lap in? The logical way to answer this was to pick a suitable base vehicle and find out. The excellent VW T5 2.0 Twin Turbo Diesel was chosen and supplied by Transporterland in Lydney, not only as one of the most capable commercial platforms and tuneable powertrains out there, but also because of its bomb-proof reliability and car-like dynamics. Having covered a hard 80,000 miles already, this particular van was also perfectly run-in! As able as the T5 is in standard trim however, the Revo team gave it even more of a fighting chance – with the addition of a bespoke ECU remap, Milltek ‘turbo-back’ exhaust system and a Forge intercooler/oil cooler combination. This was enough to take the engine to an impressive – and useful – 220bhp and with a very healthy rise in torque. More than many contemporary hot hatches!

In addition to lightweight Team Dynamics wheels and sticky Dunlop tyres, Revo chose the well proven BILSTEIN B14 kit to provide damping and control duties for the attempt. With its fully adjustable spring platform and carefully selected damper rates, the kit proved to provide the perfect control for driver and ‘Ring veteran, Dale Lomas, who was hugely complimentary of its abilities. Better still, the kit allowed the van to drive all the way to The ‘Ring and back, a journey of over 1,000 miles, as well as carrying all of Revo’s bags, equipment, spares and camera gear. Proof that the damping rates of the BILSTEIN B14 kit are perfect for the hard work of a commercial vehicle, as well as a few hard laps of the wold’s most demanding circuit.

Ultimately, Dale’s skill took only 3 laps to get the T5 under the 10 minute barrier for an industry-standard FULL lap, which equates to a comparable Bridge to Gantry time of just 9.22 – some 46 seconds faster than Schmitz’s time in the Transit. Ultimately, the skilled wheelman managed to complete a lap in just 9mins:57.36 seconds – a feat that was revealed and ratified by the onboard GPS Racelogic software reviewed after the run.

Commenting on the new record, BILSTEIN UK’s Aftermarket Sales Manager Aaron Quilter said, ‘The BILSTEIN B14 T5 kit is already one of our best sellers. It works on every T5 application and gives superb road manners and the ability to select any ride height. The Nordschleife is where we sign off all of our performance applications, so it’s not hugely surprising that the kit works well there – it was where the technology was developed and proven! We’re delighted for our partners at Revo for setting a new commercial benchmark and we look forward to offering other Transporter drivers the same levels of comfort, control and handling.’

Phone 1800 807 176
4WD World has over 40 years’ experience in the 4WD business and we will continue to honour product warranties and provide quality and accurate customer assistance.
bilstein world
4wd world network
Join Our Newsletter
STAY UP TO DATE WITH 4WD NEWS SALES, LATEST NEWS & MORE!
Connect with us
Copyright All Rights Reserved © 2016 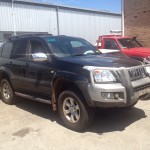 B14 and B16 Coilover Suspensions to suit Toyota GT86/Subaru BRZUpdates